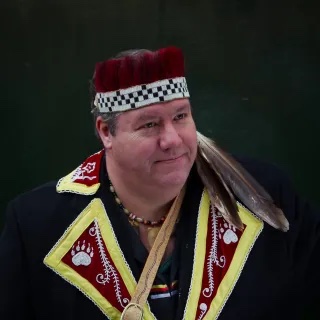 What do you enjoy about working in your industry?

It’s who I am. It is our culture, it’s what connects us to the past and connects us to the future. I mean it is who we are. When it comes from a nonprofit standpoint, the most fulfilling part of this is I’m able to help the programs and services and needs of our people, whether that be cultural, traditional languages or personal shelter and food. So there are two different paths that connect. Either way I’m working for the people.

Do you mind telling us more about your experience in becoming the chief, and both the governmental and Executive Director roles that you fulfill?

From a tribal level, I didn’t strive to be chief. That wasn’t the goal that I was doing – it’s not something you run for as in the typical European sense of governance. It’s because you work hard and you do the things you do for the people and our culture. The tribal council and citizens decide what is most valuable to the people. And then they ask you to perform that task. So in my case, I was pretty good at working with legislative issues and local state government, so they elected me in 2010 to be their chief, to fulfill that role and be that interface between federal, state, local government to uplift our people. So when I can no longer do that role, or they feel I’m not doing that role then I’ll be replaced, and someone else will be put in that place. So that’s kind of a different than somebody going out campaigning for themselves and trying to get elected. It’s not that kind of structure.

And from Executive Director standpoint…it’s helping to advance the people. The goal is to continue to build our tribe and the organization to continue to provide more and more programs and services to the people. So like for now, right now we provide food programs. We have three food distribution sites, and we work with 40 NOFA growers and colleges to grow food and provide seed and food to our people.

We also look at hunting and fishing rights, and land access, and health care. We need someone to work for the tribe full-time now [focusing on healthcare]. We need to expand on that so we can provide full-time support for our people, and we don’t have right now the renewable resources to do that. So we rely on donations and grants to perform that mission.

You mentioned that health care was one of the things that you’re in need of right now. Would you say that’s one of the largest challenges that the tribe is facing as of late?

There’s many, but that was high on the list. I was looking at the health assessment plan from the state of Vermont back in 2018, and it found that Indigenous people have one of the highest rates of chronic disease, mental health issues and other disparities. The government does a five-year Health Improvement Plan…and that plan is supposed to find ways to reduce those disparities, right? But that hasn’t really been on the forefront I think because of the COVID-19 situation. But we need to do better as a state and as a people pushing help to reduce health disparities.

In my mind that if you have a state with 5% of your population being minority and with health disparities. You would think that it would be an easier lift than it would be trying to provide that for [the other] 95%. In other words, the 5% is a lot easier to work with and to change those outcomes than it is for the whole state, and that’s where I’m running into more of an issue. Why isn’t the state concentrating on that health improvement plan for the people to make that change? And we come to notice some of those results from when we had really low vaccination rates and people getting sick.

One thing that’s a problem is pitting groups of people against one another, which causes distraction. Sometimes people get so focused on certain issues that are in need of their community, that we often are discarded or overlooked. And that was evident when Indigenous people [weren’t] even included to be covered under the health disaster declaration in Vermont.

And our brothers and sisters from the BIPOC community, I would have hoped that they wouldn’t have left us behind. But that happened. And that’s why I prefer that BIPOC not be a buzzword. The “I” is often is discarded or discounted…Indigenous people oftentimes have been excluded or discounted and not getting those resources we need. And that’s a problem within [the community of people of color], we need to be closer to each other, because, isn’t that the whole point? We’re all people of color [and have issues] that we need to work together on.

Otherwise let us speak for ourselves. Continuing to keep us in their minds, or conversations, when we are dealing with things that affect all minority people, I think would help. We can’t bring people from other states to increase our population, like, you know people move here from Brooklyn and move here from South Carolina…[and] all of a sudden you’re increasing the minority population for the people of color. But for the Indigenous, the only way we increase is by birth. So, we often lag further behind. As far as percentage of the Vermont population, we’re at 0.2%. So if we’re not included in those conversations, the more we’re left behind, and the gap gets wider between us and other people of color.

Do you mind talking more about some of the events and opportunities that you have coming up?

You can find our events on a calendar at abenakitribe.org. Coming up we have Indigenous Peoples Day Rocks!, [an event celebrating Abenaki culture on October 11th.] This is the second event that we [have] put on in partnership with Stowe Vibrancy. It was really started to not only recognize Indigenous Peoples Day, and not Columbus Day, but also [to] celebrate our culture while trying to provide the continued resources for our programs. So the proceeds from the Indigenous Peoples Day Rocks!, go to help with our food security programs, [among others]. These help our people get through the winter, because during that time people have higher fuel bills, more food insecurity, etc. We’re also going to have a vaccine clinic there.

We also just finished with the Harvest Fest, which is basically celebrating the harvest and the growers.

Is there anything else that you’d like to add that we didn’t cover that you feel is important to note?

What I’d like people to know is that, because we were forced to go through a European process of recognition, we have a tribal government. It makes things harder for people, and creates lateral violence and other types of disparaging things.

Other hate groups will say “well how Indian are you?” Nobody walks up to other minorities and say “How Black are you?” or “How Asian are you?” Yet, we’re in a culture that people tend to try to make fit into something that you’re not. So I’m just asking that whenever people see lateral violence, oppression of any of our people or anybody else, that stand behind them and not allow that to happen.

There’s an old saying, that says, “Which wolf is stronger?” and the answer is, “the one you feed.” So if hatred and lateral violence are fed, then that’s what gets stronger. I would rather work in partnership and work with people and finding a way to uplift everyone. That’s why we really need to teach about minorities items and issues in our school systems because it’s often ignored. We need to continue to promote education and understanding.